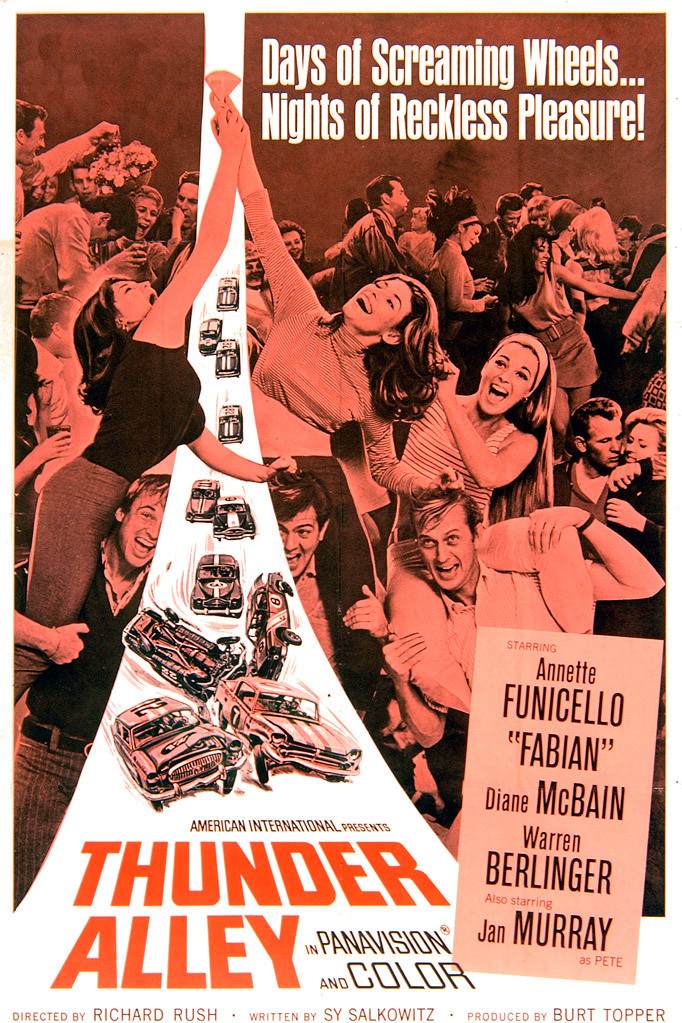 (Not that an Elvis-Annette pairing would have been a bad thing either, mind you.) Thunder Alley was the last film Annette Funicello made for American International Pictures, and to some extent the reasons become clear during a viewing.

While Fabian comes across as hopelessly stuck in the past (his stiff, two-note approach to acting is high school drama club material, his range consists of pouting or getting angry), Funicello is clearly trying to evolve - it's almost as if she realizes that her "Dee-Dee at the beach" period is over, and that to survive she must grow into a more Nancy-Sinatra-ish, "groovy chick" mode.

Problem ws, Annette was far too much the lady to pull that off, so she seems almost blatantly out of place in this movie -- a decent, ladylike but straight talking woman surrounded by drunks, loudmouths, bimbos and opportunists. After this film (and to a large degree as a result of her "decency"), AIP had no more use for her, which was unfortunate: like Vincent Price, stars who had "slummed" at AIP were basically stuck there, so Funicello pretty much disappeared from the big screen after this film (save for one, small and somewhat self-depreciating cameo in the Monkee film "Head" a year later and her canned "nostalgia" appearance in 1987's "Back to the Beach."

One more note: several others who have commented on this film mentioned Annette perfoming the song "What's A Girl To Do" in the film. I have the MGM "Midnight Movie" video release of Thunder Alley and the original 1967 Sidewalk soundtrack album. While the LP contains "What's A Girl To Do," the version of the film on the video doesn't. Also, the "official" Annette collector web sites also comment that song -- while on the soundtrack album -- doesn't appear in the film.) Is it possible different versions of this film (perhaps a "longer" broadcast version containing the song, maybe the video realease is edited) are floating around?